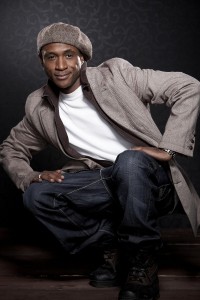 Tommy Davidson has always loved to do impressions, but there’s one statesman he’s become particularly adept at mimicking.

“President Obama has this way of talking to white Americans,” Davidson said, his jocular voice mutating into the president’s sedate baritone. “He takes words that make them comfortable — democracy, economic strength, education, health care — lines them up in a row and calls that a speech. None of it actually makes any sense, unless you’re white.”

Davidson also imitates other famous black personalities, including Michael Jackson, M.C. Hammer, Sugar Ray Leonard, Spike Lee and Stevie Wonder. He brought many of them to life as a cast member on the 1990s sketch comedy show, “In Living Color,” for which he became a household name.

Davidson brings his impersonations, along with his musings on a host of topics, to the Ramada Inn in Stratford on Friday, Feb. 11.

Davidson, 47, has been busting out impressions from a young age. At the time, he didn’t even know what impressions were, or that comedians used them to make people laugh.

“I would sit in the laundry room where I grew up and do them for my friends,” he recalled during an interview last week. “My mother would tell me to shut that noise up. It was just fun for me.”

But that expertise — along with a vibrant stand-up performance and keen sense of character development — has helped Davidson navigate a successful career both on stage and screen.

In 1990, Davidson made his debut on “In Living Color.” He played various personalities, including Sammy Davis Jr. and Sugar Ray Leonard, and even created his own characters, such as the funkified karate instructor, Sweet Tooth Jones.

“It’s one of the greatest things I’ve ever been involved in,” said Davidson, who helped to make the show one of the most watched programs on the Fox Network.

Today, Davidson is working on his own idea for a sketch comedy program, a “celebrity talent-driven variety show” that harkens back to the days of Flip Wilson and Carol Burnett. Davidson would focus on war, politics and race relations, topics that have largely vanished in the comedy television landscape, he said.

“That’s what they did back then — they did sketches on subjects like the Vietnam war,” he said. “They didn’t hide it under the rug.”

The lack of network interest in his idea hasn’t stopped Davidson from pursuing other ventures. He’s continued to perform stand-up, for which he regularly earns raves reviews. The adopted son of Caucasian parents, Davidson is able to desconstruct racial stereotypes and induce laughter among all people, regardless of their race.

He’s also starred in movies and taken on animated roles, including the voice of what he called a “Sammy Davis Jr. cricket” on the popular Nickelodeon cartoon “Ren & Stimpy.” Recently, he played Oscar, the father in the Disn

“Probably 99 percent of animation on television has no black people on it,” he said. “I’m proud to be that

While Davidson has yet to make as big a splash as he did on “In Living Color,” he doesn’t want to “deny something good.” He’s going to keep on grinding, and putting himself– and plenty of other hilarious characters — out to the world.

Said Davidson: “I’m not sweating it. The universe will make a name for me, eventually.”